Good Day, Let me tell you a little bit about what happens around the house when you can’t use your arms, or chest. Right off the bat, you can’t use your arms or chest, I just told you that, pay attention…. can’t use them for anything of consequence. You have your good days and your bad. Still very sore but lets take a look at least one positive, getting up is done almost 100% with your legs and mostly thighs…. so right now I have sculpted legs like you’ve never seen before – during a visit to the medical centre earlier this week, these guys stopped me to say what great definition I had in my legs….

Hey why is the guy on the left and the guy in the middle posing with that Rhino? Obviously the guy on the left is Eddie Murphy but the guy on the right… are you kidding me – hey, my son, take a break from your studies to get out and get some exercise, you musn’t only concentrate on your mind, your body is equally important and needs exercise as well. Seconds before this picture was taken, you just missed seeing him unhinge his jaw and swallow another of the competitors, so really I’m going to go ahead and assume there is a rule prohibiting that somewhere or at the very least it’s frowned upon….. Even though he is so impossible huge, I would venture a guess that Rhino-boy’s thighs are about a quarter of what mine are right now. I can easily get out of the Lazyboy using no arms whatsoever, with a 2006 Tercel on my back. Don’t ask how we found that out….

My point is that, yes there is such a thing as having developed your muscles too much and there is such a thing as body in-equivalency all this walking and deep power squatting have given me the lower body of Usain Bolt, Gold medalist  in the 100 meter dash BUT the upper body of an anemic and calcium depleted Betty White…. She’s so trendy right now…. I’ve been wanting to work her into a post…

One of the weirdest things about the healing of the ribs and sternum….. see picture…. the area outlined in purple is where they sawed the bone in half, starting just below my neck, then all the way south until what once was one, had now become two… then they drop in the big rib spreaders and get down to the job at hand… 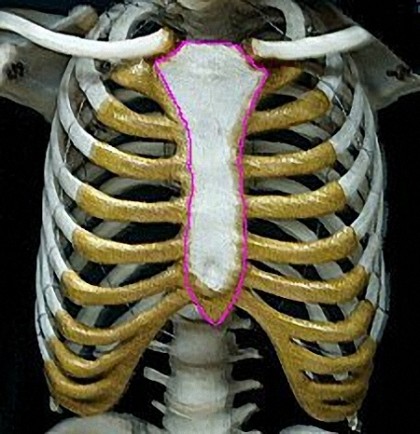 Is the clicking. Yes I said clicking… every time, well Ok not every time but pretty bloody often when you move your arms, the two halves click together. It’s the freakiest thing ever… look here at this x-ray – you can clearly see the split down the centre with the wires holding the two sides together, now imagine the two halves banging against each other every time you move slightly left or right, or reach for something, or twist or bend, or cough or sneeze in anything but a perfectly symmetrical way…. which by the way is right hard to do, you always lean slightly one way more than the other….. perfect symmetry in this situation is almost impossible. 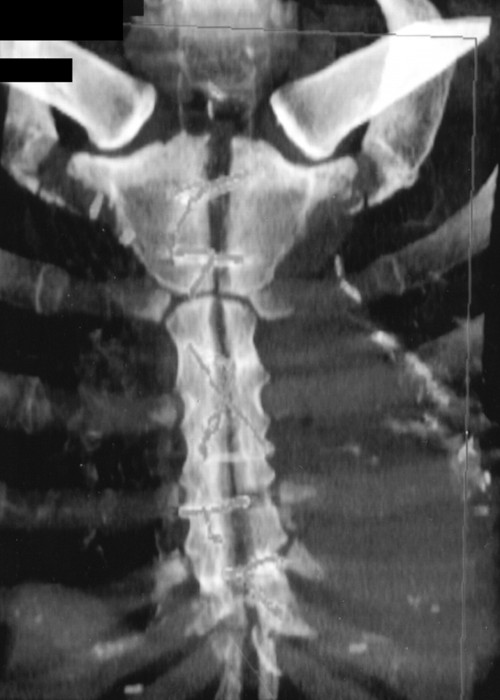 This X-ray was taken 4 weeks after the surgery so pretty much exactly where I will be in a week. Still very loose but starting to grow stronger fibres and connective bone spires. The whole shebang is different from breaking your arm or leg because usually they are able to immobilize the bone while it mends, BUT in exactly the same freaking situation as my heart healing, the heart needs to keep beating, or so I’m told – therefore it takes longer to heal, well these bones move every time I take a breath, move slightly or just about anything else for that matter. A moth flaps its wing in Hunan Province in China, it affects my sternum…. so the bones take longer to knit together than other bones….

Anyways, like I was saying, the clicking is not cool – in most instances as soon as it happens you freeze. Dead. Start trying to mentally picture the situation and ensure you haven’t busted through the wires or thrown a tie rod and now you are stabbing your lungs with the jagged pieces of bone – swinging through your chest with all the wild abandon of a birthday kid attacking a pinata….. So you live with the clicking and try to minimize making it happen, as best you can. This amazing body of ours also has a secondary way of keeping you from moving too much. The massive incision…. it too is painful and you fear it ripping open, so that right there limits your arm and chest movements, just in case you forgot the main safety feature of your midsection – the ribs, guardians of all your vital organs is currently as useless as…. as …. well I can’t think of anything clever so you go ahead and picture something useless….