I kind of passed a milestone a couple of days back. It’s been 8 weeks since the operation.

Immediately after the surgery I was given all kinds of literature telling me how 8 weeks was the magic number. That would be the ultimate gauge regarding my recovery. The bones would have lightly fused and the scar should be pretty firmly sealed. The bones will not be significantly stronger until about 12 weeks – because it’s not like an arm or leg that can sit in a cast, totally immobile while the bone heals… your chest and ribs flex nearly every time you move, so it is constantly being stressed and therefore takes longer to fuse, set and knit.

For a few weeks, I had a really large bump just under my neck, at the top of my breastbone/ribs where the two halves were wide-open, as time went on and the bones came together it got smaller and smaller, slowly pulling back into it’s natural curved shape. So that’s nice, because it was so pronounced you could see the large bump through my shirt, super creepy weird. The scar has no blood left on it but is still pretty red looking. The bones very rarely click, but on occasion – I will believe myself well enough to do something – proceed – and then pay for it.

I’ve started some light weight lifting, emphasis on the light… really light, 2 pounds. Yea I know – I hope I don’t get my skirt caught in my pantyhose…  BUT, even though it’s only 2 pounds, my chest is screaming like I’ve been lifting 1950’s V-8 Chevy Engines rather than pink 2 pound weights. Yeah pink, that’s right I said PINK.. because they don’t make MAN weights any lower than 5 pounds… at 5 pounds, then I can get red or green or blue or black but at 2 pounds my choices are limited.. I suppose I should be thankful the 2 pounders haven’t been bedazzled.

(– Completely unrelated to anything – comedic interlude that made me laugh just now – as I write this, I listen to my iTunes library on random shuffle and I have all the Monty Python albums, they’ve just played a clip in which someone calls the king a great stream of bat piss – after trying to pin it on everyone else, it eventually gets pinned on Oscar Wilde who says “I only meant to say that you shine out like a shaft of gold when all about you is dark” and he gets off and goes about his business….–) Yes, I am childish.

Despite walking about 4 KM’s a day – I’ve sadly gained some of my weight back, not all of it – but sitting at home, with my Mom here cooking and feeding me back to health, there is no way I can help it. She’s like an Italian Borg, resistance is futile – eat, eat, eat…. so I’m being treated to all my childhood favourites and I’ll tell you this – the hospital food is pretty nasty but at least you lose weight. Also for the first couple of weeks, eating was the last thing on my mind. Anyways, I need to get super vigilant and start the shedding process again, it will take some doing to get me back down to my ideal weight of 61 pounds.

It’s been a challenge getting my Mom to cook healthy and use no meat. She treats Tofu, most fish, and most organic stuff as something slightly less attractive than a Bangkok venereal disease. It’s not her fault, it’s what she knows… red meat, white bread, white pasta, tons of salt, lots of butter etc etc…

Certainly not a knock against her, she raised her boy on the diet that won us two world wars… but it’s just that I’ve spent the last 5 years getting my head kicked in about how terrible white flour and enriched this or that or partially hydrogenated something or other is – and what horrible things it’s doing to my body. Anyways she is leaving to go back home in about 10 days, and I will miss her.

I think mostly I’ll miss her because no one takes a punch like my mom…. it’s been really beneficial to work out my frustrations & anxiety on her like a human UFC heavy bag, plus it helps that she has considerably slowed down, because really – I’m in no shape to go chasing her – so it’s a win-win.

After laying a serious beating on my mom, I’m usually quite sore for a couple of days after…. all in all it’s probably a good thing she is going home before I have all my strength back, because I’ve almost got my round-house kick back…..

Good evening  – tonight’s play was a serious study of the all too common occurrence of elder abuse, we hope we’ve managed to open your eyes into a growing problem against the elderly. 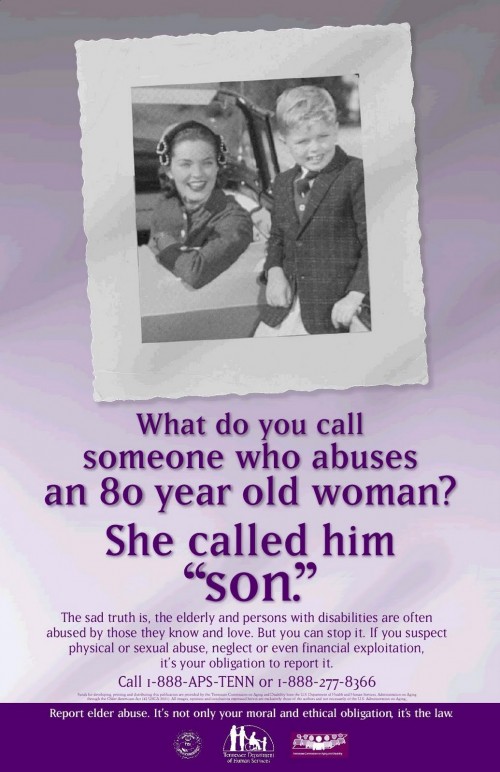 With the huge amount of boomers rapidly approaching retirement, the senior population is about to explode in this country and we invite you to check out our website. We sell all manner of weapons guaranteed not to leave a mark on thin, frail, easily bruised skin. It will give you a chance to avenge all the unholy beatings you received as a child, when it was still Ok for them to smack you without being subpoenaed to appear before the supreme court….

Today’s Free Beat-Down Tip, Several navel oranges in a pillow case will unleash a painful barrage of parental “attitude adjustment” without leaving any tell-tale markings for the meddling authorities to discover……

One thought on “8 Weeks, Pantyhose & Round-House Kicking Your Mom”