﻿There is a fine line between bravery and stupidity. If you get away with it, you’re brave, if you don’t, you’re stupid.

How do you choose which side of the fence you’ll land on… stupid or brave?

In most cases it’s a no-win, and irregardless you’ll have detractors in both scenarios. What to do… well if you are me…. You try and make up the rules as you go, confounding all the dead Olympic judges in the sky who are tasked with scoring your life. You didn’t know that did you… Well now you do, so bloody well always stick the landing!

The other trick you can use are confusion grenades (patent pending)  – I have used these for years and years, in nearly every situation imaginable, although easy to throw, proper use is an art. In the middle of a discussion, presentation, argument, what have you. Anytime you are in a tough spot – pull the pin and lob at the others in the room – then say something from left field BUT not so far out that whomever you are talking to gets creeped out. If you push it too far, they will inevitably call shenanigans on you and then you’re busted. But, if you do it right, then your statement will be just obtuse enough to give the listener pause – you can see them thinking, “well, what does that mean..I think he’s just BS’ing – but wait, maybe I’m missing something, what the hell did he mean by that” generally, what follows is a topic change and you are good to go – voila, you’ve just used a confusion grenade.

Most novices end there – big mistake, that leaves the door wide open for follow-up questions asking you to explain yourself. I usually try and finish up with some type of performance piece, where I perform a scene from Steel Mangnolias using a combination of modern dance and a tether ball. This works for me, you will have to try to discover where your particular strengths lie. For whatever reason I’ve just always been able to do a spot-on Olympia Dukakis… if that doesn’t work, as an absolute last resort – I can always go into my fail-safe where I do the death scene from Terms of Endearment, while field dressing a full-grown manatee. It’s pretty spectacular and always a winner, often leaving my audience slack-jawed, at least long enough for me to make a clean get-away…

What does any of this have to do with anything? Why are you even wasting these precious minutes of your life reading this stupid thing?

Welcome to a partial list of the side-effects for my Cyclosporine. Yes, I said partial. Admittedly, I’ve been exceptionally lucky (knock wood) with all my medications and thus far I have had only mild discomfort and relatively minor adjustments while my body achieves some type of equilibrium. Until now.

As I go about slowly tapering off some of my Heart medications, what appears to be happening is that there is no longer any internal struggle for total dominance of my inner child. In some kind of mutually assured destruction cold war truce – the various prescriptions coursing through my temple, had a Summit meeting and decided “why kill him quickly when we can work together and slowly rot him from within.” Now, with the heart med troops retreating, it’s allowed the Taliban led Cyclosporine forces an opportunity to assert themselves and take control.

Now if you would be so kind as to revisit the side effect list…. and make your selections… which one am I experiencing?

Let me give you a hint, have you ever seen David Cronenberg’s “The Fly” do you remember, after Jeff Goldblum puts himself through the transporter with the fly and their DNA melds… he starts… changing… into Brundle-Fly…. well I’m becoming Brundle-fly… 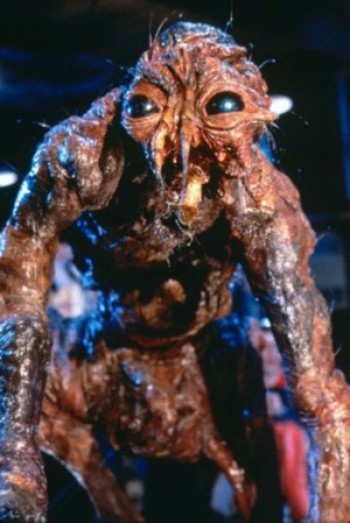 Give up? The side effect my idiot body has chosen to lustfully pursue is, excessive hair growth in both usual and unusual places…. yep… go ahead, laugh it up. The only place it isn’t growing, my head. So much for my visions of a flowing Fabio mane of golden hair. I don’t even get the all over coolness of a Jacob Twilight werewolf… I get brundle-fly, hard, coarse little hairs on my upper arms and maybe I’ll start growing a thorax.

I’ve always had some hair on my body but it was at a controlled, manly – without being gross level, but come on, do you know how difficult it is to learn how to french-braid back hair? It seems to be confined to my arms from the elbows up and across the top of my shoulders, now if I could just get shoulder pads to come back in style, I’m all set…

I suppose it could be worse, I found this photo on a medication website where some poor sucker taking Cyclosporine was really being given the business by the drug.. check it out

Hell’s yea, that is hair on dudes tongue…. OH NO, Brundle-fly is going to puke….. and we all know how flies eat, so I guess that means dinner time for me…..If the metamorphosis completes and I do turn into a brundle-fly then I’m going to need a much bigger confusion grenade to throw people off their game…. they won’t hear a word I say as they chase me through the streets with torches and pitch-forks .

← Stand By
Blowing our Cover… →