I had my second neurology visit with Neuro 1 (Team Moron) and I am extremely happy to report that they didn’t call me Mike once – they knew my name, they had the correct chart and the doctor sat with me for nearly the entire appointment where we talked about everything. All we’ve learned thus far and the best way to proceed. Their great showing and vast improvement in my care and personal attention has, effective immediately, seen their ranking move up from Team Moron to Team Dullard….. way to go guys, keep it up!

Neuro 1 and Neuro 2 both belong to the school of – get that Thymus out of there as fast as you can – If you’re joining the party late, Neuro 2 is doing a study where they create 2 groups, one has the thymus out, one doesn’t and then – both groups go on a bad news medication – see yesterdays post – for what I assume would happen to you if you started drinking the devils urine – the drug quite possibly IS the devil….  anyways, the study – so I spent a lot of time online going over all the different treatments, running the numbers, basically everything I could find about both the medication and the drug. It looks like the best, smartest way to go – is to have an the thymectomy, even though it’s a serious operation – the benefits seem to outweigh the risks. When I asked the doctor what the benefits were for going into the study if I was randomized into the no operation stream, why should I have to wait three years (the length of the study) taking the nazi Dr. Mengle drug – that will completely alter my life and still come out at the end possibly having to have the thymectomy anyways. To his credit, he answered honestly saying there wasn’t too much concrete benefit to me, the benefit would be seen for the people who come after me, after the study – letting them know how better to manage the disease. Well now isn’t that very nice and altruistic,  look, I have nothing against helping the people who come after me – it’s just that I can’t imagine hanging on for three more years like this. 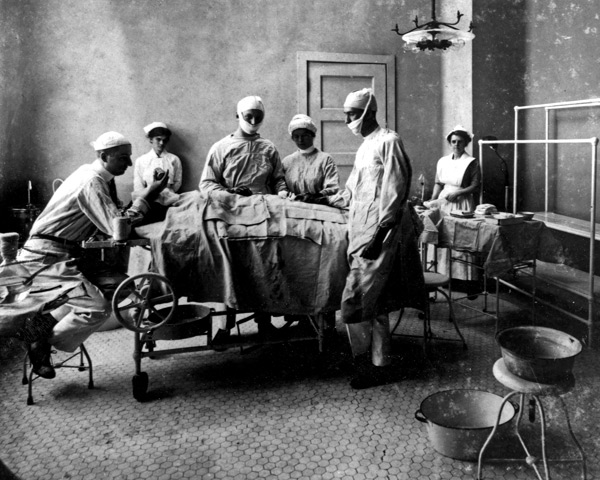 Wash our hands... What? What for? Invisible bugs called bacteria? HUH?.... Hang on while we get the leeches.

I will be randomized, if I join the study and I was expressing my concerns to Team Dullard, when they told me something interesting, apparently when you join a study, a medical study – you have the option to drop out at any time and you do not have to give a reason, just an email, or phone call saying I’m done and you’re done, out of the study and your records are destroyed. Having decided that the best course of action is the thymectomy, I can sign up for the study and if I get randomized into the having the operation stream, great and on with the study – I get what I want, they get to monitor me and gather data, everybody’s happy. If I get randomized to the no thymectomy stream, I simply drop out go back to Team Dullard to schedule me for my operation.

The results of the procedure claim success of high 90% of people who have the operation their MG symptoms get markedly better – it’s judged on a sliding scale, 1 for just eye trouble, 2 for eye and mouth, 3 for eye, mouth, throat etc etc and after having the thymus out people move up at least two levels on the scale with a high percentage of people losing their symptoms completely. Neuro 2, the study team, my next appointment is April 9th, where I’ll be randomized either yes or no – then apparently, things happen quite quickly – within 30 days I’ll be in for the operation with a big old scar running down the middle of my chest as my souvenir. 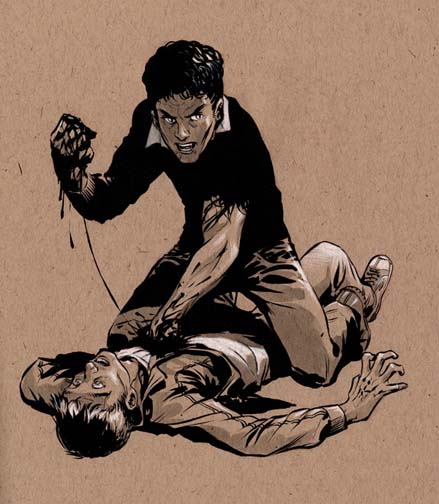 In my mind, this is exactly how the operation will happen, only in full colour.

You better believe it’s scary – but like I said, according to everyone, the benefits outweigh the risks. I can look forward to an eight-week recovery and by that time – I’m assuming It will be right around the time for my next heart operation. There is a slim slim slim possibility that removing the thymus will completely remove all my symptoms and if I’m really lucky – it could turn out to be that we have removed the catalyst for all of my issues – then fix my heart and put all this behind me – of course, that means that everywhere I go from now, after the operation and for the rest of my life I’ll be running the 6 Million Dollar Man theme in my head – I’ll be Bionic – better, faster, stronger. It kind of feels right now like I’m on the uphill of a big roller coaster, and the chains are clanking away as we climb higher and higher, this hill is gonna take two weeks to get to the top. Then once we crest, it happens quickly, not much I can do but sit back, throw both my arms up in the air and enjoy the ride.

I know people are reluctant to have an operation, you can go ahead and put me in that group as well – I afraid it’s exactly like when you talk to a mechanic about an engine – once you crack the engine block – the engine may never be the same. Springing leaks here and there, losing compression, no telling where it will stop – but you know what – at this point …… I just want everything to be over – I just want to stop being in the hospital and seeing doctors three times a week. It’s not okay. Someone once told me God only gives you as much as you can handle. Well then no need to send anything else cause I’m there, I’m about done. I honestly don’t know how people with cancer or someone whose lost a limb or been badly burned goes on. Being paralyzed or struck with some debilitating conditions whereby you can’t take care of yourself, can’t feed themselves – honestly I don’t know how they do it.

Right now, I feel really unwell 60 to 70% of the time either my hearts going or my MG is acting up something fierce – it just taints every single moment of every single day and when your heart isn’t going – you’re thinking about when it’s going to start going haywire again or when my vision is going to go away – so badly blurred and double you can’t watch TV or read or anything – when your mouth won’t work properly and can’t eat, your speech is unrecognizable and you have difficulty breathing. The breathing is really not cool, with both of my dark passengers, the heart condition and the MG you have trouble breathing – it’s always like this feeling of something heavy pressing on your chest and just can’t quite get enough air. You’re not breathing heavier or gasping – you just can’t quite get enough breath. I am SOOOOO done BUT I guess I don’t really have much say in that – It will be over when It’s good and ready to be over and I’ll sit back and take it….. Something else that I need to  come to terms with as well (but I’m avoiding so far) what if I go through all this and It doesn’t work. I want to play with my kids, I Want to Go out again, to movies, to dinner, to plays and concerts. I want to spend night laughing with my friends – I want to go back to work, ride my bike, Ski, play golf, swim, I Want – I Want – I Want  – but It doesn’t really matter, you do what you can with what comes – That’s what I’m doing. The best I can – but like I said it’s getting harder the longer this draws out.

A little discussed but huge side effect no one ever seems to mention Is, how you’re impacting everyone around You! Family, friends, co-workers, and That’s a very bad feeling Itself, very difficult to swallow, knowing how much negative energy you project and the cloud hanging over you and by association, them…. I’m so sorry. These past few days have been my toxic waste dump…. the dumping ground for my toxicity – If you know me, you know I’m usually pretty positive…. but not so much anymore. I’m remembering a scene from Fight Club – Tyler drags a guy outside from his place behind the counter at a convenience store, tyler pulls a gun on the guy – points it at his head, tells him he is going to die right here, right now. He asks the store guy what is something he always wanted to do… was this the life he wanted, did he always want to work graveyard shift at a cruddy little store – the Guy Said No and Tyler says well what what did you want to do, what did you want to be when you grew up. The guy starts crying because he’s about to die – he tells Tyler that he wanted to be a Veterinarian – Tyler (Brad) cocks the gun, pressing it harder into the guys head – then bends down and tells the guys to stop wasting his life, go follow his dreams, get out and enjoy life OR he’s coming back and he will kill him. Tyler walks away and says to ed norton….. Tomorrow will be the most beautiful day of Raymond K. Hessel’s life. His breakfast will taste better than any meal you and I have ever tasted. He’ll love life starting tomorrow morning, the air will be fresher, the light brighter….everything will be better – he’ll cherish life.

That’s exactly how I feel, if I could just be better, get better – if someone would pull the gun from my head – when you’re involved in life and get wrapped up in all the details and taking care of business and everything needs to be done today, you’re so busy being busy – you forget how great things are, how great they could be…. sitting back you get to see that, I’ve been sitting back, seeing that… it’s true – you never know what you’ve got until it’s gone….. I’ll can be better – stop wasting time – I can enjoy things, live the rest of my days with a “been to the other side reverence”….  I Assume the amount of time spent with the recovery after the operations means that basically this year will be a write off… so I’ll plan for my re-birth, (in a non creepy religious cult type way), for 2011 – yep 2011 – I’ll be living pain, drama and trouble free…… wouldn’t it be so freakin funny if the Mayans were right and the world ends in 2012……… damn……..

Have a Great Day…OK I’m off the health posts until I have more information… back to being a silly little chap….. 2 weeks when I see Neuro 2…… and we near the top of the coaster…..

2 thoughts on “Cracking the Engine Block….”