Whistling Past the Graveyard…

Gallows humor is a type of humor that arises from stressful, traumatic, or life-threatening situations; often in circumstances such that death is perceived as impending and unavoidable. It is similar to black comedy but differs in that it is made by the person affected. During times of crisis, some people use a grim form of humor as a coping mechanism. Gallows humor can be very self-deprecating, while it may sound too dark or offensive to outsiders, those in on the joke may find it somewhat comforting.

Many people who work in stressful occupations find that a little gallows humor can help put their grim or distasteful tasks in a more manageable light. Police officers and medical professionals often use gallows humor when discussing their work with other professionals. It can be a way to put some distance between themselves and the grim realities of their jobs.

As the name implies, gallows humor actually did start with the device used for public hangings. It was not unusual for condemned prisoners to use their final words as a sounding board for grim self-deprecating jokes, often directed towards distraught friends and family members. This practice of making jokes during a time of grief or tragedy soon became a coping mechanism for soldiers fighting in the trenches or survivors of a natural disaster…. 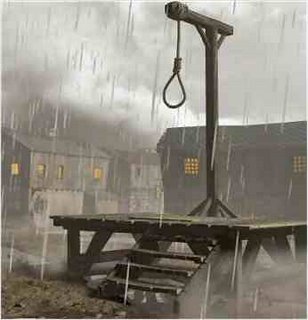 I’m gonna keep it fairly light over the weekend, then Tuesday I have my first transfusion and I have no idea what kind of shape I’ll be in, everything I’ve heard & read shows there is no typical reaction… I could be totally fine or in a very bad way and anything in-between…. I’ll do my best to post but no promises…. I’ll also try and not be too dramatic but hey, it’s in my blood… which will be all gone tuesday… this blog may turn into a financial and investment blog after the transfusion, who knows, maybe I won’t be me, but a sum total of the 1000 people who’s plasma and immunoglobin will coarse through my veins….

Have a Great Long Weekend.