Donkeys and You… Which one is Smarter?

Rounding out our animals that teach series we’re going out on a strong note, universally hailed as King of the animal Kingdom, the Donkey is without question the perfect blend of grace and wisdom, majestically holding court over all they survey. Stories featuring Donkeys are lynchpins in most of our families, and here’s another one;

A village artisan worked hard at his job making pots and planters. He would go to a nearby town to sell his wares. He relied on his donkey on whose back he would load the pots and merchandise to sell. A festival was fast approaching, so the potter decided to make some statues of various gods and goddesses to sell in town. He made beautiful statues and painted them in bright colours. He then loaded them on to the back of his donkey and set off towards the city.

On the way, he passed many people. They would invariably fold their hands and bow to the statues. By the time they reached the city, many people had bowed their heads and paid homage to the deities. Finally, they reached the exhibition ground where the artisans could exhibit their wares and soon the potter was able to sell his statues for a good sum. He was pleased indeed! 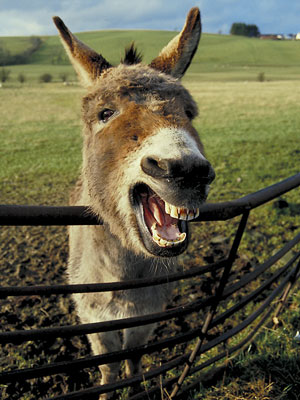 Hey, Why am I Laughing? Because I'm on the free side of the fence... enjoy your pen...

The potter took his donkey by the muzzle and set off on the road leading back to the village. Every time they would cross anyone, the donkey would stop and preen himself prettily as if he were a model. But what was the matter! No one seemed to as much as glance at him! Why were people not bowing their heads before him anymore? Desperate to catch their attention, the donkey started to bray louder & louder… He-haw, he-haw…… He went on. The passers-by started pelting stones at him in annoyance. The artisan was bewildered too. The poor donkey had thought that everyone was bowing to him, little realizing that their reverence was directed to the idols and gods tied to his back and not to him!

The previous stories had convoluted, difficult to follow moral messages many of your mistakes were to be expected. But in this story, the thrust should be much clearer and straight-forward – you may think it’s something along the lines of… A person occupying a seat of power, often finds people saluting him. If he thinks that the salutations are in his honour, he is living in a fool’s paradise. The respect is given to the chair and not to the person occupying it. As soon as he steps down from the position, the people around him vanish – so take care to treat others fairly and ensure you ego remains in check.

Nicely done, if you had been fed a systematic diet of hemlock and arsenic for the past few years, the combined effects of which were to eat massive cherry tomato sized holes throughout your grey matter. I thought we’d have come further in your education…. alas…. …the moral here is again two-fold, first donkeys are very high functioning, reasoning animals with the ability to understand the concepts of faith and worship. Much much smarter than dolphins, donkeys are our closest relatives and being groomed as human-brain transplant animals. Secondly, almost anywhere on this massive planet we call earth, people are more than willing to buy religious crap.