Well the universe sure is testing me… Saw the cardiologist and basically what he said, now keep in mind he isn’t the cardiac surgeon he is the electro-physiologist, both heart doctors – different areas, anyways he says – “well I think the time has come for us to start seriously considering a pacemaker.”

In his professional opinion, what’s happened is – a potential side effect of the ablation surgeries, has come to pass – what happens is, the laser scarred surface of the heart, instead of stopping all the errant electrical impulses – actually DOES THE OPPOSITE and creates a whole bunch of 12 lanes superhighways allowing the pulses to move about faster and with more abandon. No longer are they kept to just the two lane black tops, now they can really drop the pedal to the metal and treat my heart as one giant mother big autobahn…

So as expected, he has adjusted my medications, dropping one completely, as there are a host of side-effects with it – however if it no longer works there is no point in taking it. Doubling up the second one, so we’ll see if that has any effect, meanwhile I need to set up an appointment with the Cardiac surgeon to get his opinion. He may be gung-ho for another ablation, seems to me I recall him saying he had done as many as five. I brought the subject up with todays doctor and he says, we are starting to get into some serious territory here (as opposed to all the other heart surgeries where I guess we were fooling around) – where the risks start equaling up with the benefits, meaning success goes down and risks go up. The heart can only be burned by lasers so many times before there starts to be some ill-effects. DUH! 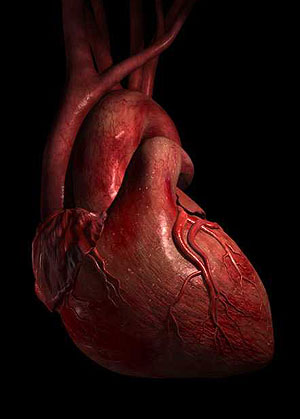 Either way, we are in rare territory, I am in the 1% of patients who don’t respond to medications long-term and who have had at least 3 surgeries and still the problem persists. Good for me and my rugged individualism.

Further to that, since I’ve been in the atrial fib pattern for almost 3 weeks now, we can’t cardiovert unless I go on serious blood thinners like warfarin or coumarin for a couple of weeks – as there is almost surely tiny blood clots floating around in my system, a cardioversion could well dislodge one and then it’s goodnight Irene.. which despite my attempts at a positive, happy-go-lucky state of mind is beginning to look like blessed relief.

No, of course not – BUT, the whole thing is incredibly stressful, which doesn’t help and enough is enough. When I was in his office today he hooked me up to his EKG & EEG monitors and I was Atrial Flutter with the two top chambers of the heart beating at 280 beats per minute. He said it was high but not unreasonable so, when in flutter you could see beats of 400 or 500, because it isn’t really beating, just sort of quivering. Therein lies the problem, because it’s fluttering and not beating, the blood just sits there, and just like a scab on your knee, scabs or clots form – little blockages that disrupt the blood flow. If one of these clots decides to move to the heart or brain, I am in serious serious trouble.

So I’ll try the meds and hope they make a difference – at least until I can see the Surgeon and see what he says…. meanwhile, if it gets to be too much, I’ll have to start pounding back the blood thinners and try the cardioversion as a stop-gap measure. Another un-cool option where they stop my heart, reset and then restart, plus I get burns on my skin from where the paddles touch me… not a fan, sooo not a fan.

I just can’t describe the feeling, I know I’ve tried here before so I’m not going to go into it again, but cheese louise, will it never end – I can’t even do light exercise, but I guess that is OK because I have no appetite. If I sit still and stay in the same position for at least an hour or so, it starts to calm down but even something as minor as changing positions in the chair or going to the bathroom, or reaching for a glass of water, sets off waves of pulse pounding drama.

Here is where I am trying to get myself to next, nothing I can do at this point will make any difference, the whole thing is completely out of my hands, so – why bother worrying about it, yes it could kill me in my sleep tonight but I could also be hit by a car tomorrow and die just as easily. No guarantees, no promises and no one ever said it was going to be easy, or fun for that matter. So all I can do is play the cards I’ve been dealt. I don’t consider it being particularly brave, it’s basically the only option I have left, stressing and dwelling on the situation every minute of the day, just makes everything worse by a factor of 10. Maybe I can do it, maybe I can’t, but I’m going to try…..

But please, I’m begging for a new dealer soon, the cards the one I have now has been dealing – suck.

That’s it, you now know exactly what I know, so no more information until I see the cardiac surgeon…. it is unfathomably hard to disregard every signal your body is screaming out -saying you need to be in red alert, emergency-panic mode, but I have to try.

← I Certainly Hope you Don’t Expect Me to Go ON…..
Why can’t I just be left alone to love my Tiger? →

One thought on “Why Doesn’t Canadian Tire sell New Hearts?”