I was really kind of counting on the world ending last Saturday. I figured I had pillaged and plundered plenty, not to mention walked on the moon and discovered the Titanic wreck while out snorkeling one day – you’re welcome James Cameron. I have incredibly developed lungs, you see. I once had a part-time job blowing up passenger blimps. They wanted me to blow, but problems arose when I discovered the job sucked, not blew. It’s a long story….

The other reason I had sold everything, quit my job and had doubled-down on the rapture being last saturday was simple, I had been given a heart, a heart too too sensitive, too connected to human-kinds inhumanity and short-sighted, narcissism – the pain and cruelty, I’m unable to count the nights I lay weeping in the street, contemplating, simply, why?

Well that, and I can’t seem to get a really good burger anymore. They’re all either too greasy, or too wet, or the condiments overpower the meat, or the bun is 63 sizes too large, so by the end of the burger essentially you’ve eaten the equivalent of a small grain elevators worth of wheat. The meat is under-cooked or over-cooked or occasionally only can be called meat in the most general of terms… If you can’t get a good burger, what’s the point? Why keep going? Why carry the shackles and restraints foist upon you by “the man”?…  Across the earth are heard the cries of “no meat – no peace” as nation after nation succumb to the mockery of ill-mannered, ill-conceived and ill-prepared burgers….

Ok, well, clearly I am avoiding talking about my health. But I suppose I must.

It sucks… so there, hey maybe I should go and try to get my job back with the blimp company, now it sucks, not blows…. your soaking in it, I can’t believe it’s not butter, must see TV, start your engines….   again with the stalling…

OK so, as reported I was to go into the hospital so they could stop my heart, then after they had a quick smoke out back, come back in and re-start it, all in the hopes of “re-setting”  the destructive pattern it was locked in. Everyone who’s ever been repeatedly shocked with the paddles of unholy despair – raise your hands. Really, none of you? Come on! Don’t be shy…. nothing to be ashamed of… No one?  Ok, let me explain what it feels like….

Imagine a friend of yours, someone fairly close but not a best friend, imagine they had an aunt and she died and left them some money. Now, even though they had several things they could have done with the money, they decided to go out and buy a Russian Locomotive with 33 rail cars attached, every single one of them loaded with steel ingots. Another one of your friends, this one could be a best friend if you wish, erects a braced and re-inforced wall of concrete and field stone, secured with massive cables normally used to hang bridges. The second friend then securely straps you to the front of the retaining wall, which incidentally they have built directly in the middle of train tracks.

Now friend 1, the jack-ass who spent his money on a Russian Train, loaded with the ingots, stops about 3 miles away from you, and then at an agreed upon signal, floors it. Now it takes a good mile or so before the train really starts picking up some speed, as it bears down upon me, the guy driving, uses a laser level to check where the exact dead center of my chest is, then he climbs out of the engine and spot welds a 75 pound anvil to the front of the train, where the laser level has indicated it will directly impact my chest.

So as it speeds towards me, I say a few quiet things to myself and brace for impact. Which happens all too soon. Momentarily, my skin separates from my body as I become one with the train on a molecular level. Our atoms actually fuse and I AM THE TRAIN, watching as the puny body strapped before me is hurtled some three kilometres down the tracks. Suddenly I am rudely ripped from the atoms of the train and painfully snapped back into my body as it lands, in a crumpled heap and a tiny whimper escapes my lips.

Now, have your friend pick you up, drag you back and build another wall, while the train backs up and repeat the procedure 8 more times.

Yes they shocked me 9 times. The only reason I can make this comparison is because I have been hit by a train a number of times, otherwise the analogy of the train and the cardioversions would be ridiculous. But I assure you, they are exceptionally comparable.

It was friday of last week, this is Tuesday and I still have great big circular burns across my chest, from where the anvil, I mean paddles, made contact with my skin. 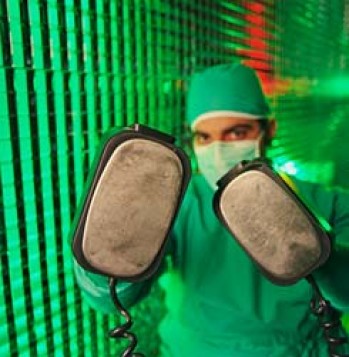 OK so… That’s part 1. I’ll continue the story tomorrow and let you in on the rest of the situation and what it means, what the future holds for me. And dear reader, for you….