Best Way to Punch a Granny in the Face

Turns out this thing on my desk is a com – put – er and the other thing with the funny shapes and book learnin’ numbers is a key – board, the purpose of this key – board is such that when I  hit the letter squares in certain patterns ( a very complicated dance of index fingers) it makes the letters show up on the screen of the com – put – er.

But, as was famously mentioned time and again in Harry Potter ” There’s no such thing as Magic”

BUT, how can a movie based on an entire world, based on nothing but Magic, claim outright that there is no such thing as magic? It’s this very sisyphean logic, a sort of riddle that closes in on itself, a paradox turning inward faster and faster until it accidentally opens a wormhole and creates a rip in the fabric of time… it’s this logic, that has allowed me to step through – surf the ages and punch old women who are rude and/or bothersome to me in the present, in the past… when they were younger and didn’t eat just toast and tea and could take a proper punch.

Their calcium negative bones waiting for the opportunity to snap like a thin piece of balsa wood at the slightest provocation. It’s hardly a fair fight. I once broke my mothers arm with a particularly vigorous eye blink.

I have enormous lashes and granted I have mastered the art of batting them, but the real strength comes from a strenuous regime of  exercise, eating right and the horse steroid trenbolone, shot directly into my eye lids. You can’t really tell and for all intents and purposes they look quite normal, but can bench an impressive125 pounds and they have enormously thick veins running through them.

Then I simply climb back through the time tear and viola, mischief managed.

As I was saying, I have nothing against old women but it’s their aggression, the unchecked granny rage running rampant in the streets that scares me the most, 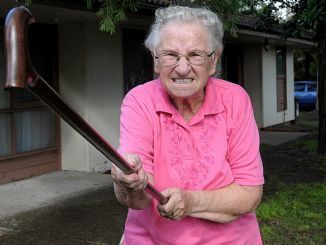 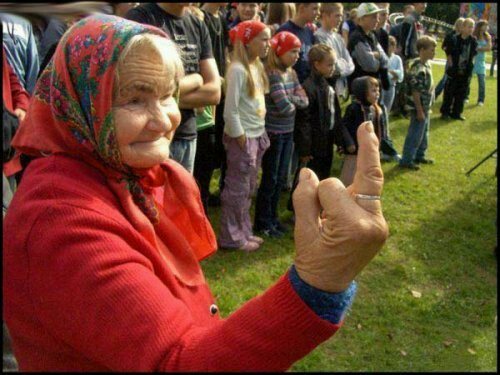 Where do they get off… I’ll tell you where it’s a little place I like to call “good night Irene” it’s right at the corner of my left jab and my vicious upper cut.

Here, before I finish let me tell you a quick story about grannies who based solely on their age think they can get away with bloody murder…. we’re at the supermarket and I’m standing in front of some bananas looking for just the right bunch, when this old tart comes flying in and tries to bud in front of me, she who weighed maybe 80 pounds if you strung fishing tackle off her head and me, weighing significantly more than that…

Now look, If you say excuse me, I am more than happy to get out of the way but if you don’t and just try and push past me, I don’t. Our elderly trollop, well she didn’t say a word just tried to get to the bananas with some kind of lame-ass granny elbow manoeuvre and how can I explain this… hmmm ok – have you ever watched a Rhoomba try and get around a couch?

That little robot vacuum, it just bumps into the couch and bounces off, spins and makes another attempt a couple of inches down, then bounces off again…. it was like 8th grade health watching all those little sperms try and get into the egg, just hovering there, frantic, tails quivering with anticipation but unable to penetrate… or get to the bananas in this case.

Finally she relented and realized the monolith wasn’t going to move unless she spoke and so she said “excuse me” and Lo did the mountain not move for her and did not the sun shine upon her face and did not the whole world of bananas become hers for the taking….

Saying “Excuse me”, such a simple little thing… you’d be surprised how far that and a punch in the face gets you these days…

← Why your Brain may be Melting & Honey Boo Boo…
Hemingway, S’mores & A Dearth of Tenderness →