Feeling much better today. Not 100% but a good 70%, which is definitely a passing grade – a solid B.

On the positive, now I know, first hand, exactly how this would feel…

Overly dramatic you say? I beg to differ. Well, I partially beg, because now, with the worst behind me –  I suppose the chances of my head actually exploding were relatively minor. BUT at the time – there were moments when it truly felt like that was exactly what was happening. I do remember thinking at several points there must be a way to relieve the crippling pressure and what a wonderful idea Trepanning was.

Trepanation is the oldest surgical procedure for which there is forensic evidence. Out of 120 prehistoric skulls found at one burial site in France dated to 6500 BC, 40 had trepanation holes. Trepanation was also practiced in the classical and Renaissance periods. During the Middle Ages, trepanation was practiced as a cure for various ailments, including seizures and skull fractures. Out of eight skulls with trepanations from the 6th-8th centuries, seven skulls show clear evidence of healing and survival after trepanation suggesting that the survival rate of the operations was high and the infection rate was low. 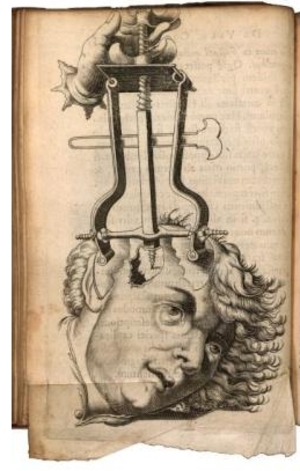 Thankfully it didn’t come to that and like I said, I’m feeling much better. Thanks to everyone again for your support and well wishes, once my cult gets rolling you will all be rewarded….

Hopefully tomorrow I’ll get that last 30% back and be feeling my self again and I can get back to confusing everyone with my often rambling and frequently incoherent musings…. with no new holes in my head.

Head Cheese is disgusting and I refuse to have it talked about in my blog, absolutely noone loves head cheese, nor will they ever….. damn – I just brought it up twice…..