I think we can all point to at least a few instances from our lives where we’ve learned some very valuable life lessons from frogs. Here is one you should add to the list.

Once upon a time there was a bunch of tiny frogs who arranged a climbing competition. The goal was to reach the top of a very high tower. A big crowd had gathered around the tower to see the race and cheer on the contestants. 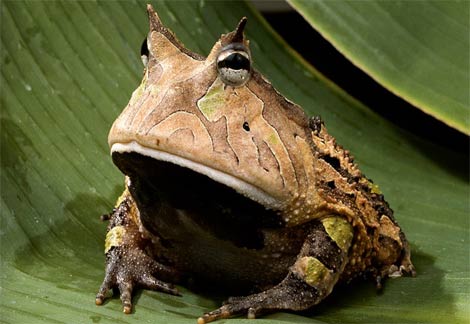 Just look at this smug bastard, see how he mocks you... he knows you won't understand the moral of this story without my help...

The race began… Honestly, no one in crowd really believed that the tiny frogs would be able to reach the top of the tower, the crowd yelled statements such as: “Oh, WAY too difficult!!!”  “They will NEVER make it to the top.”  “Not a chance that they will succeed. The tower is too high!” – The tiny frogs began collapsing. One by one. Except for those, who in a fresh tempo, were climbing higher and higher. The crowd continued to yell, “It is too difficult!!! No one will make it!”

More tiny frogs got tired and gave up. But ONE continued higher and higher and higher. This one wouldn’t give up! – At the end everyone else had given up climbing the tower. Except for the one tiny frog who, after a big effort, was the only one who reached the top! THEN all of the other tiny frogs naturally wanted to know how this one frog managed to do it?

One of the spectators asked the tiny frog how he had found the strength to succeed and reach the goal? It turned out the winner was DEAF!!!

Now some people may think the moral here is – don’t listen to the nay-sayers and stay focused on achieving your goals despite what others say. But that conclusion is stupid and wrong. I’m pretty sure the real moral of this story is two-fold, first I didn’t even know frogs could hear, they don’t even have ears for christs sake, so the first lesson is to teach us about frog anatomy – the second message here is clearly that deaf people are good climbers and so if you have a deaf friend or acquaintance you should try and gather literature about jobs that require climbing skills.

I hope you’ve found this story helpful. Have a Great Day…

PS – I’m feeling much better, fever & headache have not made an appearance today.

← Getting Seasick on Waves of Emotion
Getting Goosed with Knowledge… →