Now, forgive me the odd creative license in relating my story to you. I will stick to the facts to the best of my ability and not try to over-dramatize my experience….

My entering the hospital was the day the Angels wept, the skies darkened and the earth’s polarity was momentarily reversed…. the heavens themselves shook with all might and fury and all great Neptune’s Oceans could not hold the tears…… Ok, maybe – that was a teeny bit dramatic. It’s what I’m trying to avoid BUT, I’m pretty sure it is mostly true, at least that’s how I remember it. Mind you, there has been a lot of drug induced fog, swirling around….

Everything hurts right now, being creative makes my teeth hurt. I shall soldier on, because no one ever said comedy was pretty or easy or particularly hygienic for that matter –  I sit here in my own 10 days worth of filth, I have a beard… I’ve been unable to do anything but take the most rudimentary YMCA Hobo sink bath since the surgery – this I tell you to prepare you for the gruesome details to come. There were ups, there were downs, triumph and tragedy.. mans ability to soar against insurmountable odds, the… see right there, getting all dramatic again, this won’t be easy…..

We had to check in the day before the surgery, between 1 and 3 in the afternoon, that was Tuesday the 31st. I figured the night before checking in, I would be a wreck, but I was not too bad. It’s the curse of creativity – being able to extrapolate every hare-brained scheme and possibility known and unknown, every possible doomsday scenario…. what if the big one finally hits the san Andreas Fault just as they are making the first cut and the whole Pacific Seaboard slides into the Ocean? It could happen. What if, a wounded & half starved Wolf somehow found his way into the room, tantalized by the smell of meat and proceeded to render me asunder? It could happen, you don’t know it couldn’t. What if a forgotten, long orbiting piece of Skylab chose that exact minute to plummet thru the operating room ceiling?… it could happen…. so I was running thru a couple of thousand of these possibilities but was only taking them half seriously. Besides I figured I still had Tuesday night to really get myself good and panicked sitting alone in my hospital bed. No longer playing the really far out scenarios, now as it got closer to the actual operation, my stupid head began to run through the bad things that might really happen. The completely plausible possibilities, the actual, scary could be’s….

So we showed up at about 2:59, spending as much time free as possible. A disaster was narrowly averted when we had to make a last-minute trip back home to get the two good luck charms my girls gave me to tape to my fingers. You see, since my first heart operation the kids gave me some small trinkets (charm bracelet charms) to tape inconspicuously to the inside of my fingers, as good luck talisman. Well we left for the hospital and I forgot them, so we headed back – picked them up and all was Ok again. Everything was making me nervous, what if we missed the 3pm check-in, would I lose my spot and the next chap in line get it? I was reasonably sure that was not the case but who knows, why chance it – when there could still be a hungry, wounded Wolf prowling the grounds of the hospital.

Checked-in, whew – 3 minutes to spare, we are a go. Went up to the 12th floor and was shown to a private room with a killer view of Vancouver….. taken with my phone. Which you are not supposed to turn on, or even have – as they interfere with all the monitor do-hickeys, helping keep some folks alive, but really when faced with a view like this you have to take a quick snap……. 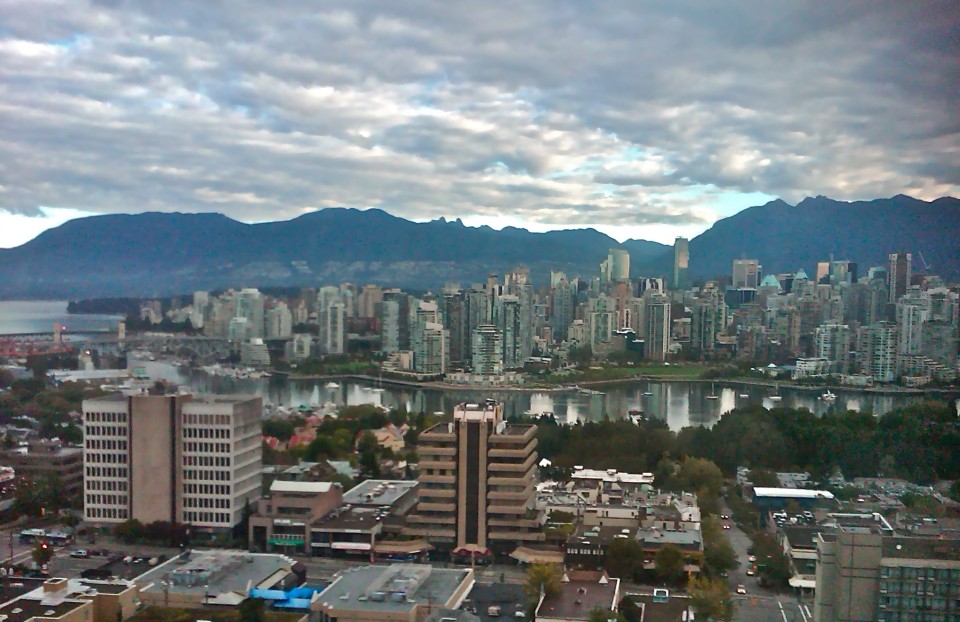 While, I’m pulling pictures off my phone, I never showed you the big scary machine they used to do my Plasmapherisis, or blood transfusion/cleaning… I had the huge needle in one arm, that had to remain motionless and the blood was taken out of that arm and the cleaned, shiny, new blood went in the other arm after taking a roller-coaster ride thru this machine, along with a host of other medicines and what have you, dish soap, WD-40, Franks Red Hot and some other stuff – seen at the top of the machine…. That red tube off to the left is my vital life juice NOT inside my body…….

But back to the check-in, so here I was in this nice room and I still hadn’t spoken to any Doctors about all the specifics, when was the sauna open, the gift shop, where was the hospital bar located…. That was to change – I guess they figured most people are gonna be somewhat nervous the night before, so they just bloody chalk-a-block your night. I saw Doctors and Nurses – non-stop, people from physio team, surgical team, anesthesia team, neurological team, nurse team all with reams of information and questions. It was overwhelming and quite a bit to process – they were all telling me about the part their team would play in my adventure. Pre – during and post surgery…. what would be expected of me, lots & lots of info, how I planned on paying for this… OK that last part never happened…. Thank God…. because I’m sure it was astronomical.

Visiting hours ended strictly at 8… there are a lot of very, very ill people on that floor so they very strictly enforce the rules, it had an A and B ward and only dealt with chest stuff, so lung transplants etc etc anything chest BUT NOT cardio. So my peoples had to leave and I was alone. Well me and my Gigantor brain, spinning off and just starting to really get up to speed…. the horrific possibilities came faster than I could handle them – before I had a chance to get nervous about something, I was already onto a new horror, it was like my head was trying to out horrify itself… stupid, stupid head. I tried to make the thoughts stop, I thought maybe a sweet, sweet hook-up with one of those 23 year-old swedish nurses I was sure worked here would take my mind off things. You know, join the medical mile high club, except on the 12th floor, not a mile high – technically the 12th floor club. Alas, there was nary a swedish nurse in sight, in fact most of these ladies had passed 23 a looooong time ago…. Turns out that is a good thing – because while it would be nice to have a super hot swedish nurse be the last thing you ever saw before dying – if you don’t want to die, then it’s an equally beautiful sight to see a 54-year-old nurse, built like a tank with experience up the wazoo saving your sorry ass…. Every single nurse was absolutely killer, fan-freakin-tastic and they made a very difficult time, just tolerable.

So I watched some TV, then turned it off and sat at the window, late, late into the night, just looking at everything. Would I be OK, would I be somehow different, would it all work out just fine or would I hear the words “bring out the Gimp” and they meant me….. Finally about 4:00 am I decided to get in bed… not that it mattered I figured there would be plenty of sleeping in the days to come, plus, I was gonna be OUT for the rough stuff…. unless there was a leak in the anesthesia hose and I woke up during the operation, but I was still under just enough so I couldn’t speak and tell them I was awake and they kept operating on me as I lay there wide awake, in horrific pain…………..stupid, stupid head….

So that’s the day before… next time….. The Operation. I’m still in buckets of pain, but it’s good to be back with you…. sort of…