One of my fondest memories comes from the years I spent as a Lumberjack.

Back, before all this environmental hoopla & what-not really got rolling, I was down in the lower Amazon basin, researching & cataloguing new poisons for an online poison-dart business I was looking to open.

Sadly, the business eventually folded, even after my splashy Super Bowl commercials – because I had failed to ascertain that the customers still using poison darts, didn’t have access to wi-fi in the jungle… you see there were no Starbucks then – so the orders were few and far between. Had it taken off, well, they could have been making a Facebook movie about me. Anyways, back to my lumber-jacking (that sounds rude) the one thing that hindered more than any other in my search for poisonous and elusive jungle frogs and plants – were all the bloody trees.

So on a whim one day I just started having at the Jungle brush and giant old growth trees which formed the dense canopy, home to so many creatures that at times the forest seemed to come alive. After a few days of hacking and slashing these massive sentinels of wood and bark, it became obvious, I would need some tools, my bare hands were proving wholly insufficient. Once I had secured an axe, I was delighted to find that I had an aptitude for the work and enjoyed the musky smell of fresh-cut wood and male pheromone I was broadcasting.

After a number of days I happened upon two celebrated scientists from the United States who were also in the forest, researching previously undiscovered flora and fauna. It was laughably easy to convince them that it would be to their benefit to help me and start clearing out some of these meddlesome trees. After their initial hesitation, they agreed and the three of us began our deforestation.

Keep in mind, when we met, these were elderly academics – I’ll tell you this, a few weeks of cutting kapok trees in 100 degree temperatures and 12,000% humidity will do wonders for your fitness level, check out this pictures of Josh and Stuart during one of our lunch breaks…. 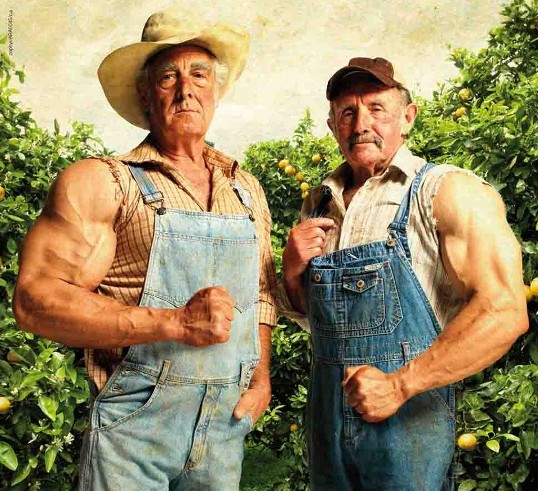 Pretty impressive guns fellas, no more complaining about long session of test marking & writers cramp, eh?  Ha, Ha! The rhythmic chopping became a soothing, calming melody as slowly, the incessant sounds of the birds, monkeys and infernal insects began to ebb. We were making surprising headway for three people, but we didn’t really start to clear some serious acreage until we enlisted the natives. It was remarkable, great swaths of nature yawned before us and where once stood rudimentary footpaths now impressive 8 lane highways became possible. No need to thank me, Brazil – it was my pleasure.

Once the deforestation was well underway, I had succumbed, the bug was in me, literally…. I had contracted a serious case of Bot flies…. google it, you will vomit. Or, tough guy, you can watch this video of a Bot Fly removal, I dare you! – HERE

Besides that bug, I had caught the other type, the Lumber-jacking (again, really?) bug. So I headed to Canada, the Northern Wilds – where the forests were endless and a man could truly spread his lumber-jacking (this is getting ridiculous) wings and experience the euphoria that only comes with the crackle of fresh timber being felled.

The bunk house was pretty thin on effeminate types, scruffy beards were de rigueur, as was the ability to go long stretches sans shower. Naturally you had to love pancakes, we were MEN, hardened by toil and want. We would often go months without seeing a woman and as legend has it, that was why Paul Bunyan kept the ox around…

As with all good things, eventually it had to come to an end, and that it did – with a declaration of war. It was the Great War of the Falkland Islands, and as with most wars – the first place they turn for the hardest, most grizzled and dangerous men was to Canadian Lumberjacks. I was proud to serve, defending the Commonwealth, God Save the Queen – and the realm for which it stands… against those godless Falklanders.

We were the most vicious squad in-country and for me, pound for pound…. you can take your Ninjas, Samurais, Zulu warriors, Roman Centurions, Huns, Vikings and any other of histories fiercest fighting men and chuck’em… because believe me, the last thing you want to see coming through a dense jungle or forest looking for you – is these guys, Canadian Lumberjack Commandos….

PS – To counteract todays, testosterone-gasm… Tomorrow I will be featuring a Cute Cat Video!

PPS – Happy Birthday to My Dad!

← Literally, Using the Word Literally
The Curse of Being Macho & Kittens →