How Hollywood Blew It!

Allow me to share my intention for tomorrow. I’m dragging the old ball and chain…. to see True Grit – she is not completely sold on the idea. Right off the bat, she hates Westerns (typical) – strike one….. secondly, she’s never been too enthralled by dudes in eye patches – strike two….. and lastly, on occasion, movies by the Coen brothers giver her nightmares…. strike three. The best I can hope for is getting hit by a wild pitch and having to take my base, otherwise the whole outing could pinwheel off into a dark and scary descent into a passive-aggressive couples movie “discussion”….

Now this is a constant source of consternation for me because I happen to love everything the Coen brothers have ever done, inclusive of some limited edition drawings they did in the second grade, most off-beat duckie pictures, EVER! Sure their big films are fantastic, Raising Arizona, Big Lebowski, Fargo, No Country for Old Men….. but it’s the smaller ones i really dig, the black humour is delicious. Blood Simple, Barton Fink, Hudsucker Proxy… certainly not for everyone but definitely for me…. So it is that I now find myself saddled with an entirely inappropriate amount of enthusiasm for tomorrows trip to see the movie.

Some of you know, but most of you don’t that my background is in film and television and it wasn’t until my turn as Tony Montana in Brian DePalma’s Scarface that I really made my mark. It’s a little known fact that we had shot the entire movie and then in post production, DePalma decided he didn’t like the timbre of my cuban accent and so had that hack Pacino come in and give it a try. If you look close enough you’ll see what I’m talking about, Pacino just doesn’t have the same raw animal intensity I am able to command, so try as he might he just couldn’t summon the same level of immigrant enraged menace. I choose not to fight it with the screen actors guild, I didn’t want to be labeled as a “heavy.” 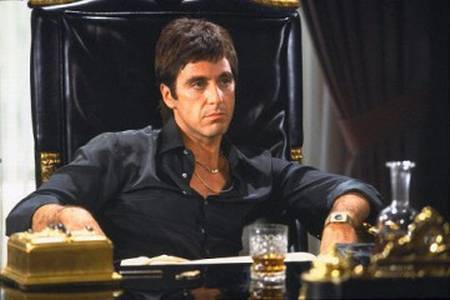 Pacino was only too happy to take credit for the role I had created...

That was reflected in my next role, I made the creative decision to do a total 180 and accepted the role of Daisy Werthan in Driving Miss Daisy, my lord the stories I could tell you about Morgan Freeman… however once again, at the last possible second, Bruce Beresford the director didn’t like the cut of my jib, and decided I wasn’t able to successfully pull off the old age neck skin mask I had been wearing. He ended up bringing in that whore Jessica Tandy to body double me…. bad experience all around.

Jessica Tandy holding the Oscar that rightfully should have been mine...

Whereas most would be overcome with defeat, I found a renewed swagger and decided to once again challenge myself, I had had no luck as a man, nor as a woman, so the decision was easy, for my next role I had been offered the part of Seabiscuit, in the movie of the same name. By all accounts I was fantastic. The most difficult part being all the running…..

Due to a catastrophic costuming error, this was what I wore all through the filming of Seabiscuit, the mistake was discovered very late into production.

Sadly most of the movie had to be re-shot when very near the end of filming, a sharp-eyed production assistant noticed that wardrobe had massively screwed up, I had actually been wearing a king kong costume the whole time, once again the bulk of my work would end up on the cutting room floor.

I figured I had given movies a fair shake and we just plum didn’t get along, and that’s Ok.. some things just weren’t meant to be – they had me, I was right there and they missed what could have been the next Buddy Hackett –  but they blew it – it’s Ok, I’m still gonna watch as many movies as I can… and wonder about how I would have played the part.