The birth control pill (also called “the Pill”) is a daily pill that contains hormones to change the way a woman’s body works and prevent pregnancy. Hormones are chemical substances that control the functioning of the body’s organs. In this case, the hormones in the Pill control the ovaries and the uterus.

How Does It Work?

Most birth control pills are “combination pills” containing a combination of the hormones estrogen and progesterone to prevent ovulation (the release of an egg during the monthly cycle). A woman cannot get pregnant if she doesn’t ovulate because there is no egg to be fertilized. The Pill also works by thickening the mucus around the cervix, which makes it difficult for sperm to enter the uterus and reach any eggs that may have been released. The hormones in the Pill can also sometimes affect the lining of the uterus, making it difficult for an egg to attach to the wall of the uterus. Commonly found in packages not unlike the one represented below; 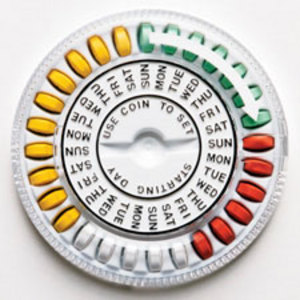 Why are we strolling down birth control lane? So that I can share a little story with you…..

I don’t remember exactly how long ago it took place, or what age I was –  but rest assured, whatever age I was, I was one adorable tyke. Let’s put me at somewhere between 3 and 5 years old and go with that. I, like many children born in the freewheeling 60’s, spent a good deal of time with minimal parental supervision, the majority of my pre schooling days were spent in a commune bordering Algonquin National Park. We lived off the land and my sister and I, sang in the town centre for food money, when our harvest lacked abundance. We sang haunting acapella harmonies while Mom would occasionally join in playing the spoons or mouth harp.

Just another morning helping sculpt me as a youngster....

Eventually, the free-love, free-style and freedom we were experiencing, the utopian paradise proved too good to be true and we had to move on to the city in order to get our book learning on….. and we did….. once there, we had a period of adjustment – being comfortable with a fixed address, four permanent walls rather than Tibetan Yurt we had previously called home….

It took some getting used to, and the adjustment period was fraught……. fraught……with pitfalls. For example, take a look at the pill wheel above and put yourself in the frame of mind of a 4-year old kid. A kid that loves candy. See where this is going – yea, yea you can. I found the funny colourful round package and proceeded to eat every single pill out of a brand new package. My. Mom. FREAKED….. panicky calls to both the hospital and our doctor were next. You see, she wasn’t terribly concerned that I had done something potentially life threatening, no, the way I understand it, her main concern seems to be, that I was going to turn into a girl…..

Typical result of WAAAY too much estrogen.....

I didn’t….. and life went on….as a beacon of man-ness to be admired and emulated…… even after ingesting enough estrogen to make C lint Eastwood start shopping for Hummel Figurines………… and that is why, to this day I have a pathological fear of PEZ….. or any other small dispensed candy.