Heaven or Hell… Table for One Please….

I don’t expect you’d find it to be too much of a stretch to imagine that the thought of death has crossed my mind more than a few times over these past months. Funny… and by funny, I mean pretty much the total and exact opposite of funny…

The cardioversions, the surgeries, the hour upon hour spent laying in emergency beds, or my own bed for that matter trying to breathe through some terrifying episode. The doctors, the waiting rooms, the procedures and blood tests and CT’s and X-rays and EEG’s and EKG’s… plenty of time on your back, with nothing to do but stare up into the great hereafter… I’ve never spent much energy dwelling on what – if anything, is next, I was always having too much fun, busy with the right now…. Things change…

I don’t know what I believe just right now, I’ve read a few books on the subject and spent a hefty chunk of time online, where there are some pretty freakin outrageous ideas about what happens next. It’s an odd subject and doesn’t lend itself easily to study, because here’s the kicker, most of the people who die, are dead and therefore unable to fill us in on what’s going on. Oh bother! What are we to do? Well in the quick and immediate I think most of us have our version of what we think happens, it’s all over – finished, or perhaps you’re re-incarnated, or maybe you go to heaven, or to hell etc etc…

The truth is, no one really knows. It’s all speculation, and no amount of speculation could possibly shed light on this great mystery. Perhaps, then, the most important use of time, energy and effort isn’t in wondering or worrying about our inevitable last breath, but rather, in making the most of the breath we are taking right now.

The thing is, I’m not sure if I believe in heaven or hell. Well, I’d like to think heaven exists – but I’m not so sure about hell. Hell makes less sense to me, because I can’t imagine the world works that way. I can’t imagine a hell any worse than the one we humans create for ourselves right here. I don’t believe the universe punishes you for being bad. Frankly, my dear, I don’t think the universe gives a damn. I wish it did, but I think it’s too busy infinitely expanding to keep a naughty and nice list of everyone’s transgressions. Of course I still have an extensive list of people I’d like to see sent straight to hell….
. 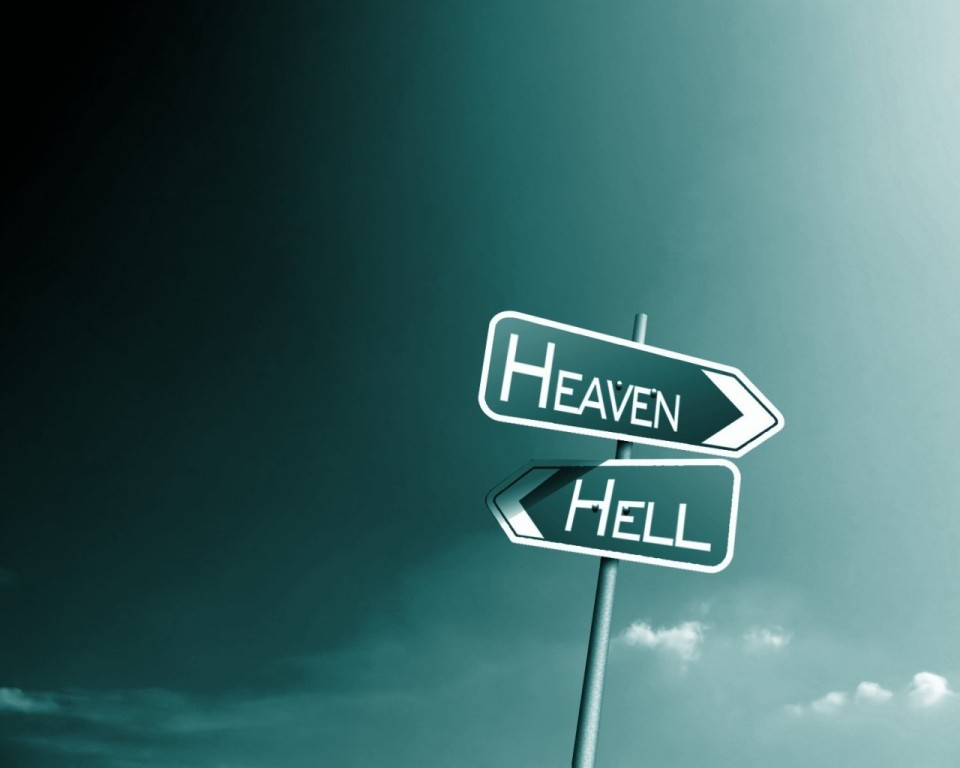 I think the whole punitive thing is an obviously human construct, and while I do believe in the concept of Karma, that is an entirely different thing from a system of retribution and reward. I believe what you give out comes back. There is no room for punishment for violating rules, which tend to operate in black and white when there are so many different shades of gray. That being said, I still catch myself in some of my worst moments still fervently praying, “Dear God, I hope Grandma’s not watching this.”

Speaking of Grandma, what about that, what about our partners and family? If everything just stops when we die, doesn’t life seem meaningless if we’re not able to bring some of our identity and memories into the post-death world? How about the recognition that we ARE those people that we love so deeply, they are not only memories, they are us, and the memories we create for them, are what we become once we are gone. In death, all illusions of separation melt away – it’s such a beautiful concept we’re connected to each other in ways we can’t presently understand. OK maybe this is getting a little new age, crystals and unicorns for me but I’m just saying… what if…

There is a short blurb from the book Tuesday’s with Morrie where he talks about something very much like this, “When one wave was afraid to crash on the shore and die, a much wiser wave reminded the terrified wave that he was, in fact, not a wave at all. He’s the ocean.”

The reason I like this theory is because who wants to think that when your time comes, that’s it, food for worms. Everything we’ve done and experienced, useless…. meant nothing.

Whether our consciousness continues to exist in another place who knows, yet to be proven, and probably never will be, like I said earlier – they’re dead. But scientists are now beginning to examine what happens in the initial stages of death, and using the experiences of those who have gone through it and come back.

In the last half century, advances in medical treatment have led to the first reports from patients about what we experience while we die. Medical experts argue that death is not a single point in time, but a process. It used to be widely held that life was a light switch, you’re alive, click – you’re dead. Now they understand there are stages – the first stage is usually when the heart stops beating, and breathing stops. During this time, the brain still continues to function until it is starved of oxygen and shuts down.

Little is known about what happens in the brain during this time. However, between 10 and 20 per cent of people who are successfully resuscitated can remember experiencing certain sensations, including a pleasant and peaceful feeling, seeing a tunnel and bright lights, and the ability to hear their surroundings. Some people say they were floating and could look down on their bodies from above, even accurately describing details that had taken place at the scene. This is called an out of body experience. Amazingly, some of these sensations appeared to have taken place after brain had shut down.

What is so interesting about out of body experiences is the fact that accounts are remarkably similar. Does this provide proof that our souls continue to survive after death, or are these sensations changes happening within the brain as it shuts down? I read an account of a prominent doctor who explained that as the brain shuts down, one of the first things to go is the ability to perceive peripheral vision and so we get tunnel vision… is this why so many people who “die” then come back talk about seeing a long tunnel?

Rather than these studies and readings of what happens when we die freaking me out, I actually think they may have calmed me down a smidge. I have no interest in dying yet, but knowing we fear the unknown, I made the unknown, known… or at least to the degree I can and I really think it helped.

Of course I could be totally wrong and be going directly to Hell for questioning the existence of Heaven, in which case I promise to come back and tell y’all to start praying….. hard…

2 thoughts on “Heaven or Hell… Table for One Please….”