It’s been a fair while, since I’ve disgusted you… or at least I hope it has.

I’m going to disgust you twice today, once with my stupidity and secondly with my Scar…

First, my stupidity – I want to talk about the word Macro – Mostly, I’ve heard and used the word as it relates to photography, but I made the mistake of looking the word up in the dictionary to find antonyms – only to discover that what I thought it meant, it didn’t. For some reason, I always thought it meant small. Macro photography meant taking pictures of teensy weensy details, like flowers and insects. However, turns out the word actually means very large in scale, scope, or capability. Completely opposite to what I thought it meant. I can hear, nay feel – the rising tide of anger, disappointment and shame rolling out across my readers. I don’t know what to say except you can be sure of one thing, and to you I promise this, my days using dictionaries ARE OVER. Stupid, stupid stupid book.

Before you have a chance to recover from your first bout of nauseating disgust, I’ll quickly hit you with roundhouse kick of disgust #2… I’ll do this by showing you some truly disgusting, yet haunting, fascinating, macro shots of my scar and scabs… I’ll show you just how the healing is going… up close.

Obviously the only thing you can really see is how the scar itself is doing. It’s been awhile and I figured we all needed a bit of a breather on the whole health subject. It’s enough that I think about it 72 hours a day, why should you. Generally it’s looking pretty good, almost all the pain is coming from inside now – from the darkness, the emptiness – the scared inner child….. Every so often I will move in a certain way and the tightness of the scar will tug or pull but hurt is not the right word for it exactly. It needs to be more fully healed before I can really start stretching the skin and making the whole area less tight, like when you have a burn, the skin shrivels slightly. 98% of my pain comes from the chest muscles and the bones healing, slowly, that too is getting better.

In this first Photo you can see a whole shot of the chest, some of the swelling is gone, the redness is going down and the bruising is also quite a bit better. You may notice the Nascar track around the scar itself, the reason for that particular modern art installation….. I am still not suppose to be letting the shower water hit it straight on, so before my showers, I have to put on a sterile pad and then cover the whole contraption with the ultra high-tech Saran Wrap & tape. I got tired of ripping my chest hair out and so shaved the merry-go-round to avoid giving myself a brazilian on my chest every time I showered.

I’m warning you these are disgusting, so don’t look at them during Thanksgiving Dinner….. The Second shot is another Macro of the last spot to heal, down at the bottom of the scar, it was where I had all the leakage, being upright caused all the ooze to drain down to the bottom and exit there, note the elegant balls of blood, various and sundry other liquids that have pooled there. Each time the wound closed up and I did something that re-opened it, a new blood ball or clot formed. So you can see it was re-opened a number of times…. good for me…

Lastly, the close up of the chest tube area, the line in the middle is the hole where the chest tube was and all the little circles around the outside are where the Home Depot Garden Hose sized stitches were located. So as you can plainly see, all looks much better and the healing is proceeding quite nicely.

Last Chance to exit before viewing the horror….. Enjoy your Turkey and Have a Great Day!. 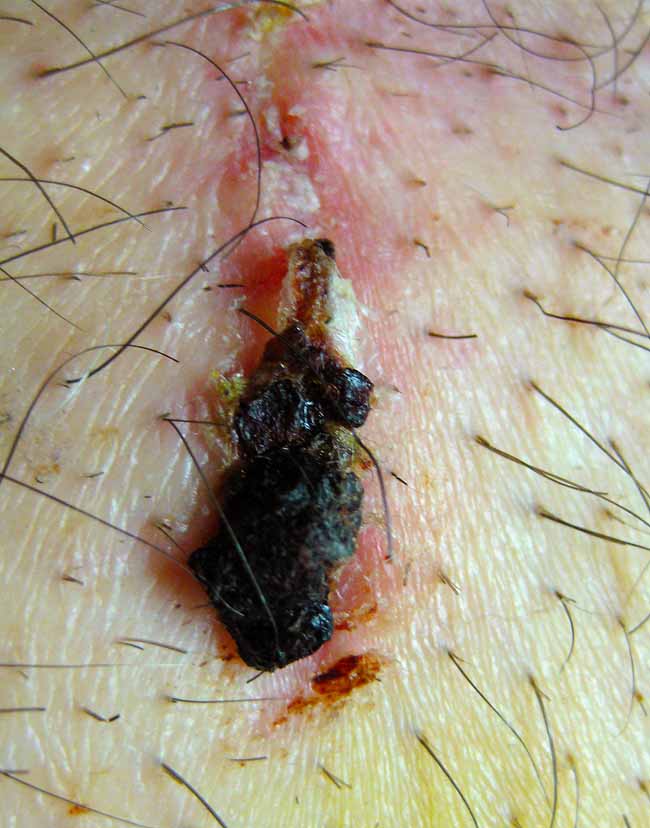 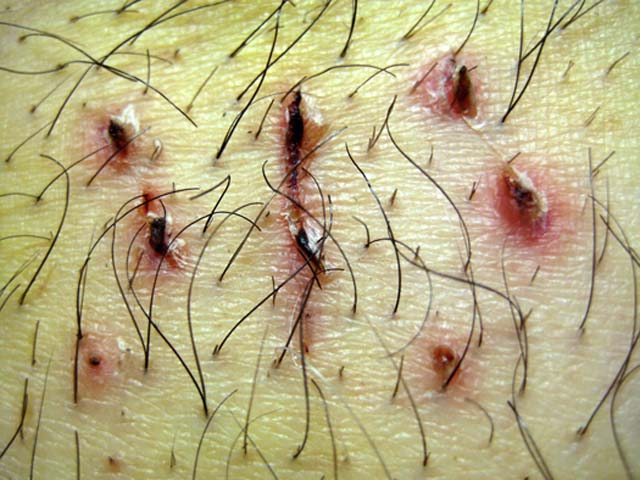