Waiter there’s Immunoglobin in my Soup…

Ok so, just got confirmation earlier, this morning, pretty quick right, I only had the appointment yesterday and My Neuro, who I was pretty keen on after our appt. has gone ahead and kicked some butt for me…. her secretary tried to set up the IVIG treatment and was told they didn’t have any availability until at least mid June…. my doctor, Gillian, who if I’m not very much mistaken has fallen pretty hard for me – apparently, that time frame didn’t sit right with her – she called the transfusion clinic herself and raised hell until suddenly, magically there was an opening Tuesday next week….. to be followed by appointments thursday and friday.

IVIg is obtained from – literally – 1000 different plasma donors – the plasma is sent to a processing center for mixing, antibody removal, chemical treatment and filtration to remove viruses and any other unwanted pollutants. This is followed by the  product being freeze dried. All this processing ultimately means IVIG treatments are astronomically priced at $10,000 for a single adult infusion. I need three. You can bad mouth the Canadian health care system all you want but Sweet Fancy Moses, what if we were in America… I’d have to turn back to prostitution….. not for the money, just to take my mind off things….

We are all well aware of the fact that I, at times, have a slight hyperactivity problem and have great difficulty sitting still for too long. This IVIG treatment, will require me to sit immobile for 6 hours with tubes all up in me. For 3 days…. that will be tough. I can bring magazines and books and my ipod and maybe I can fall asleep… but according to the brochure absolutely no alcohol allowed………..oh really so you expect me to sit still, be transfused while at the same time staying completely sober…. why don’t they just ask me to pawn my Miss America crown while I’m at it….

The possible side effects are significant, and again it’s a case of the benefits outweighing the risks but it just seems like every single treatment has risks all up and down the wazoo – is there nothing they can give you that fixes something while not destroying something else, where is that medicine? The risks include:
Headache
Dermatitis – usually peeling of the skin of the palms and soles.
Infection – such as HIV or Viral Hepatitis by contaminated blood product
Pulmonary Edema from fluid overload, due to the high Oncotic pressure
Anaphylaxis for example, anaphylactic shock
General Damage such as Hepatitis caused directly by antibodies contained in the pooled IVIG
Acute renal failure
Venous thrombosis
Aseptic meningitis

All of them serious enough to warrant some concern but, this treatment is the best answer they have right now for me, so – having weighed the odds to the best of my abilities, I’m going for it…
Of course there is also the unspoken side effect to consider, turning me into a flesh eating zombie, so as a precaution I’m including this handy portable guide for everyone, please go ahead and print it out, and carry it in your wallet or purse and occasionally check me against it…. 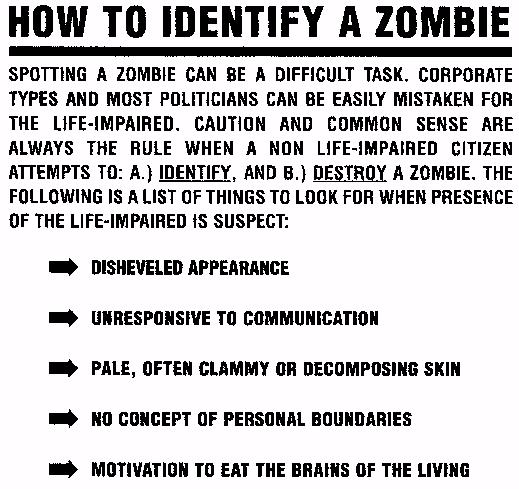 Thank you for your service and watching out for me….

One thought on “Waiter there’s Immunoglobin in my Soup…”